As a teenager in the “Wonder Years” era, you know the show that features kids growing up in the 60’s, my mother taught me how to call a talk show. She would call and win contests, etc. I don’t remember what kind of shows she would call  but she taught me to wait until the last caller was about to hang up and dial the last number. The first national talk show I was on was the Kim Komando show I believe I called in on a day that you could call during certain hours when they recorded the caller for later broadcast. My question was how to make digital pictures from slides. She had the answer and suggested this Cobra scanner. She has her on store so she said she would send it to me. It works great but I have about 600 more slides to copy. 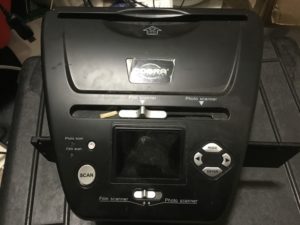 My Calls to Rush

December 11, 2015 Here is the link to this Rush Limbaugh show for this call. As you can see this call is total different from his normal political discussion. I had a question about duplicate photos on apple products. He actually offered a suggestion that worked.  He is really smart on apple products and he enjoys talking to the callers about it. He is actually a beta tester and discusses interesting things when they first come out about apple products. A friend actually did not believe Rush talks about Apple products. Luckily another friend recorded most of the call and put it on YouTube.

September 13 2018 Here is the link to the call I made to Rush Limbaugh.  this is the second call I made to him. I always make sure I say I am from Wendell, NC because  I want them to know I am from Wendell, NC not Raleigh, NC. I think they let me in this time because the screener thought I said I was calling from Wilmington, NC and the Hurricane Florence was headed that way. I talked about how everyone ignored Obama missed deeds. Here is a hint, you have to listen to what the host wants to talk about and form your topic around that.

There was one more call to Rush but he was not on the show he had a guest host. His name is Mark Stein I do not know the date but I wanted to talk about if Trump would have the support of the congress. I do not remember the details. But I do remember when I first started talking mentioning it is always good when Mark’s get together. He laughed and mentioned at one time all of Rush’s guest host were Mark’s.

September 27, 2011.  Not really a talk show call but a talk show host. I have never called Dave Ramsey. When Dave Ramsey launches his new books, he does it right. He wants it to hit the New York Times Best Seller list. His Book Entree Leadership did just that. I want to say his first stop was Raleigh, NC, Not Durham, Not Charlotte but Raleigh. Well sure enough I was a loyal listener. I even got free tickets to the seminar. I did everything he said get there early. Get up front. I got to watch the event and when the seminar was over we traveled to a furniture store out towards the airport. I was there and folded my ticket like true amateur radio operators do and put it in the hat.  Dave had a little girl draw the ticket and guess what, It was mine. I was recording it but my battery in my phone was running out of current. I won $2,000 and decided to purchase my first MacBook with it. Here is the YouTube of me winning the money. I never say, I don’t win anything.

I was in the background for WPTF coverage of the Hurricane Hugo. I had a ham radio station on top (or near the top) of the building giving reports on what we were hearing. I was also on WPTF about Astronomy.

For my first attempt at this park see K-3867 Swift Creek Bluffs State Nature Preserve I had tried to activate this park before but when I got passed #8 my battery went dead. No fault of my battery.  I hadn’t charged it in the last six activations.  Lesson learned.  I am gaining more confidence in the…

I need to step up my game and activate more North Carolina parks quicker.  At this rate it will take me four years to activate the parks.  Today’s activation was a success.  I was able to activate the park without getting my car damaged.  I was pretty good navigating out of…

As everyone knows that follows me my goal is to activate every park in North Carolina (230).  This is not North Carolina.  This does not prevent me from activating parks in other states as I visit for other reasons. My friend W4JE wanted me to rescue some spare parts from the storage room so…

Thanks to the hunters and the Park to Park contacts.  The park is 45 minutes from my home in Wendell. Met my goal of park activation. I always like to make a brief tour of the museum visitor center if  they have one. I did so on this one today.  I told the staff what I…

This would be considered a failed activation but I learned something. Always charge your battery after each activation.  I must have been thru 6 activations prior to my first battery failure.

My friend KX4ZG had never activated a park before.  We parked in the parking lot and had a successful activation. We operated from Mark’s truck and I failed to get any photos. That is very unusual for me.  This may be a Multiple park situation co-located with: K-4567 – Capt John Smith Chesapeake NHT K-4581 –…