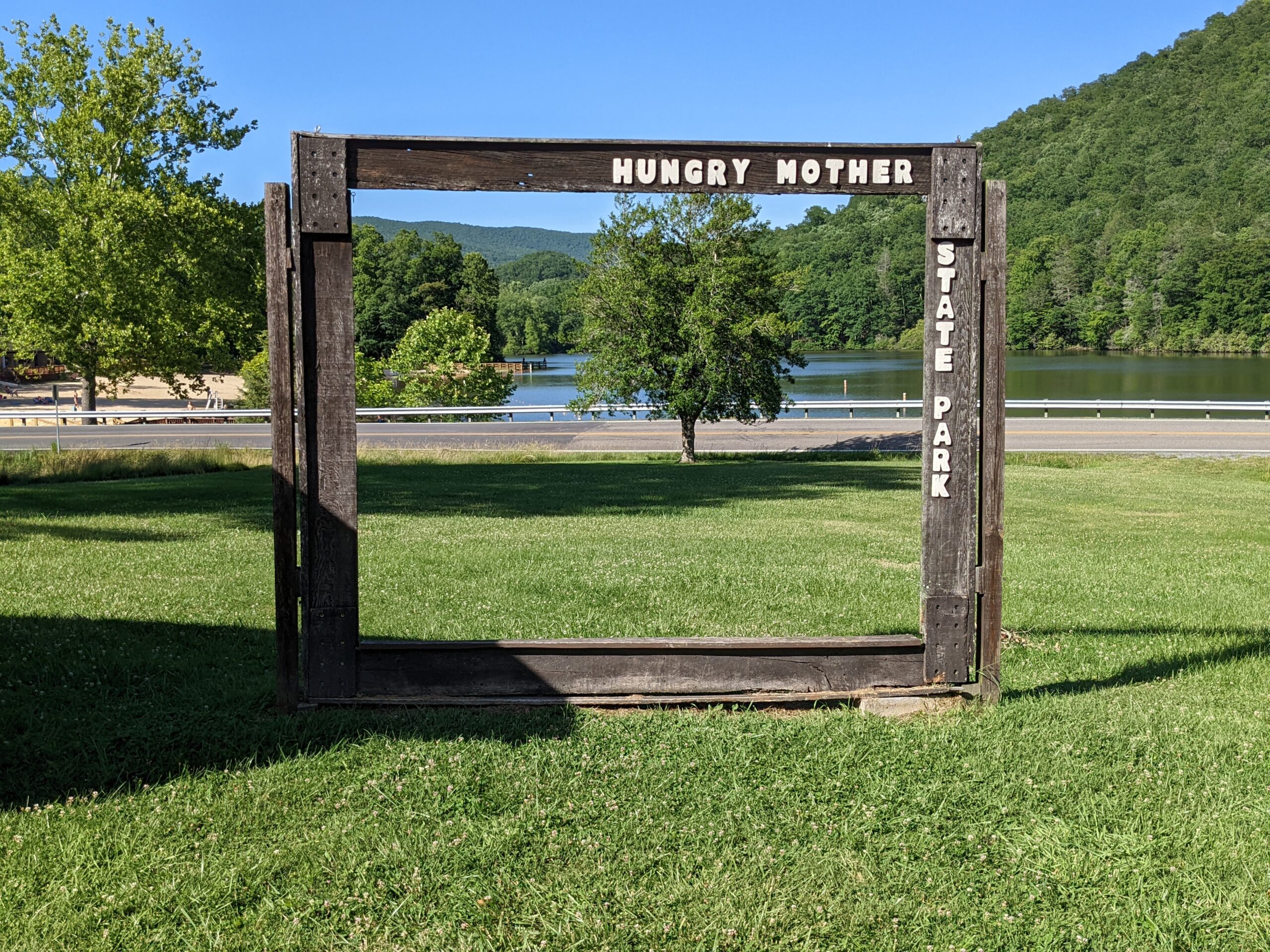 A short time for planning this solo camping trip. I had just made reservations a couple of days before the actual camping trip.  I decided to make a reservation for POTA park K-1303 Hungry Mother State Park in Virginia. I don’t ever remember us going camping here as a family in the 70’s.  I do remember my mom thinking her family was from the Marion, VA area.

On the way down I realized I forgot to bring my sleeping bag and mattress.  I checked the GPS real quick to find a Walmart. I had found a Coleman 40 tent that was advertised as soft and for tall people and the price was reasonable. I also purchased a blanket to use as a mattress. The sleeping bag was very comfortable and soft. I like it better than the other summer bag I have. I thought I should be ok with that. At this point remember to compile a checklist and check it before you head out. A checklist may be different for each trip.

I do not ever remember a solo camping trip before. I had always been with the Scouts or camping with my nephew.  With no internet and nobody to ask when to eat, I was able to spend some time saying a few prayers and reflecting on the world’s issues. 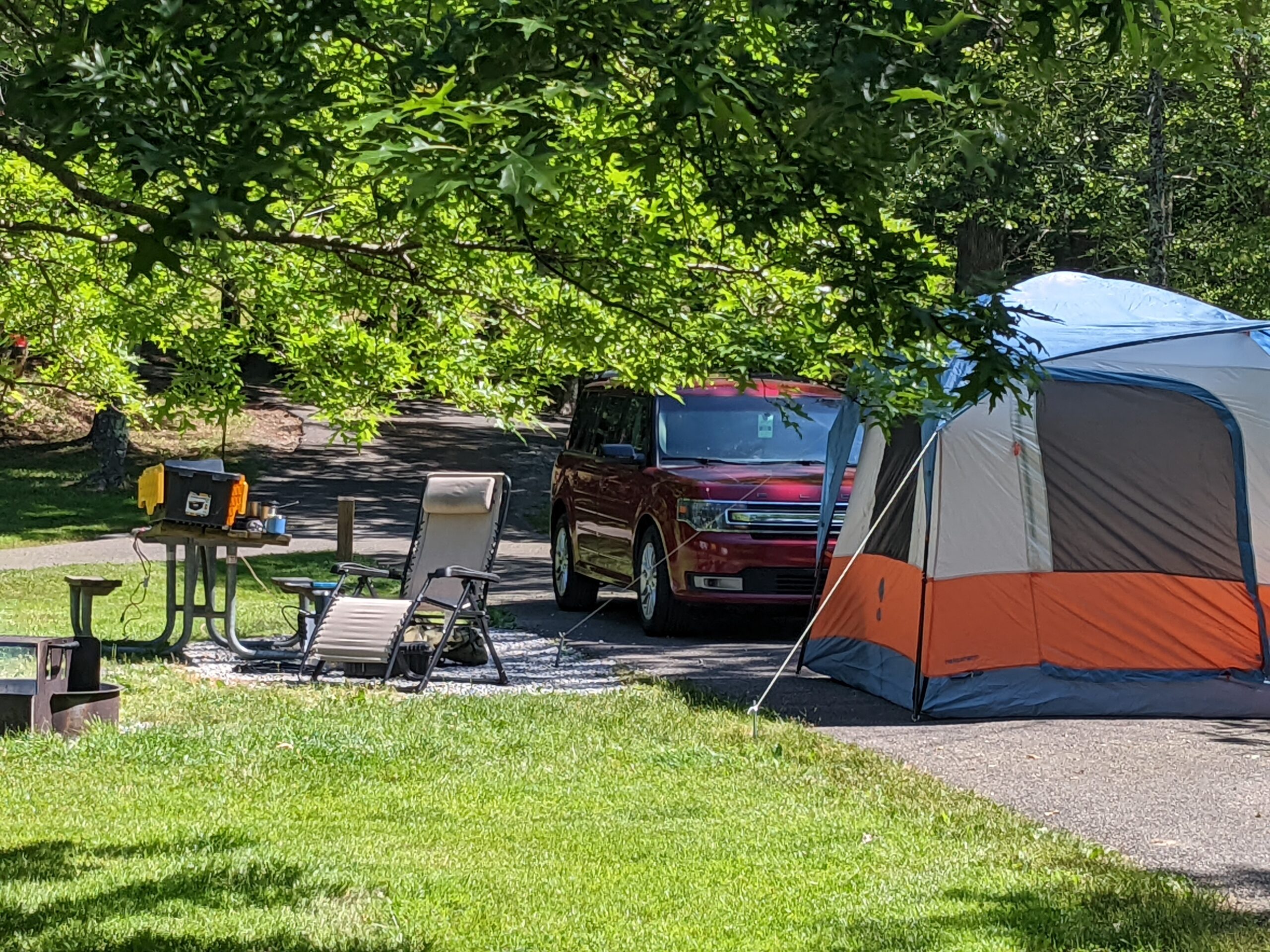 I started setting up my radio and planning my dinner.  The neighbor that warned us about the tent setup invited me to a country boil.  I had heard of it but never went to one. I accepted the invitation. 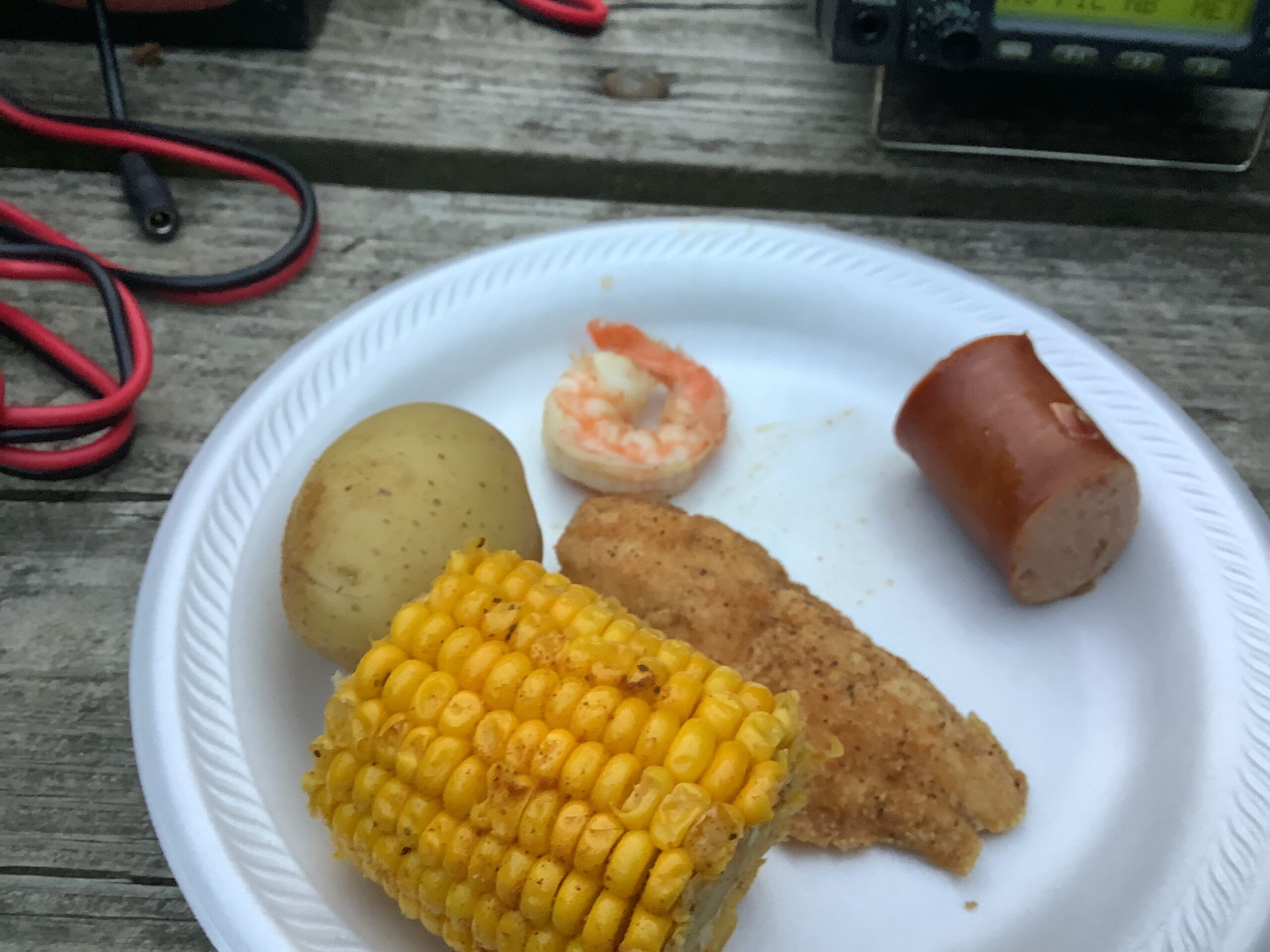 Between eating and making my amateur radio contacts I managed to complete 40 some contacts. The neighbors two teenage boys came by and I had them take the microphone and give their name to one of my contacts.There were two families represented not sure of the boys relation. It had been a while since I had a pileup. I tried to catch part of the call and go to the next station but I only did a couple of times.  I need more practice.   Highlight of the night was when KO4BEE Jeremy of Holly Springs checked in and letting me know he had tested with my group the FCVET. I am glad he mentioned that.
Here is a map of my contacts I made the first night. 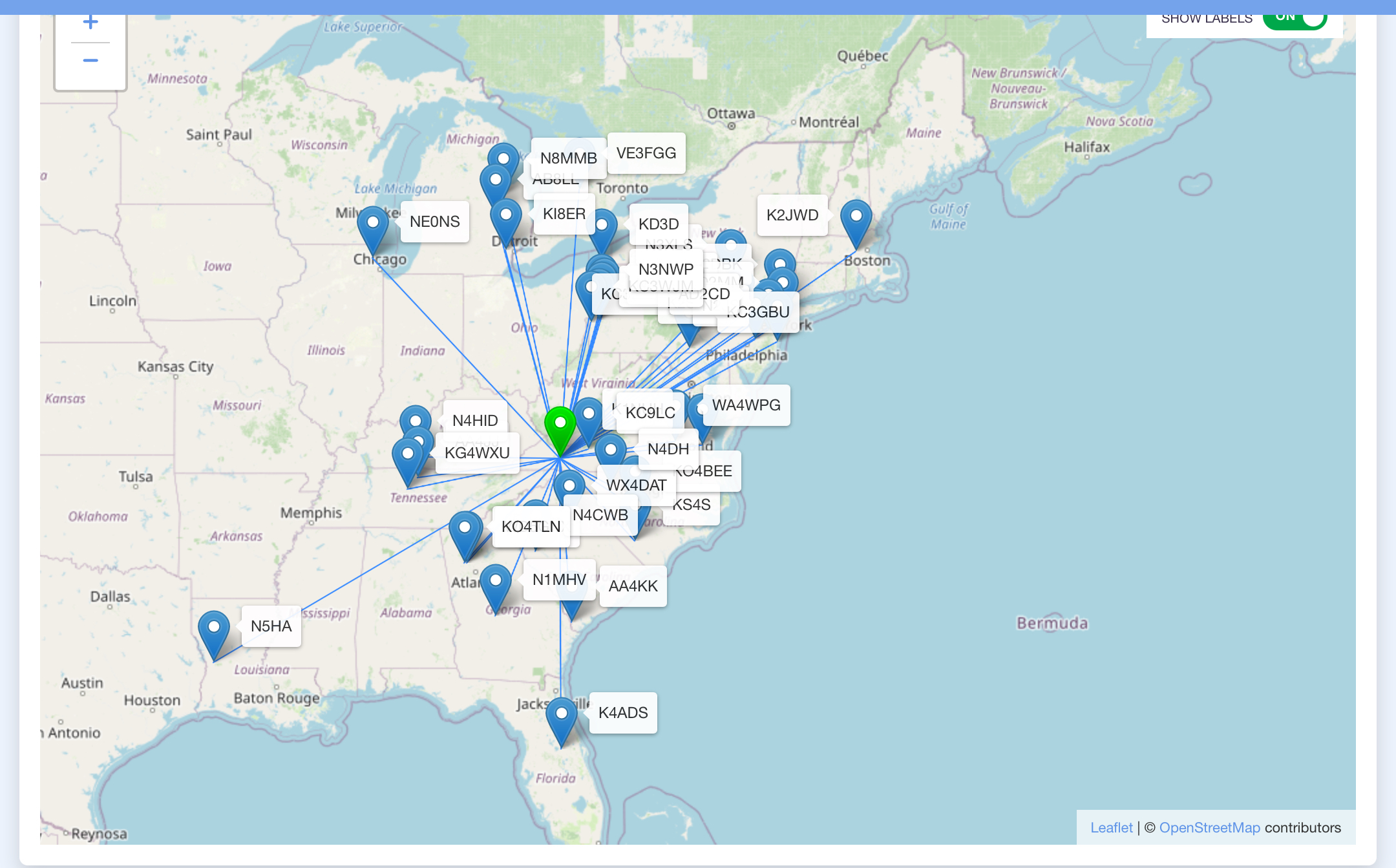 Everything I do has to involve astronomy.  Tuesday was a nice clear evening.  I thought this park would be great for a Dark Sky site. As I was leaving I asked the ranger if any Astronomy was done and she said a professor comes out twice a year and does a star party and I mentioned Staunton River and she said there was a plan to develop that park as a dark sky park.  Good news.

My phone service was non existence and had limited internet options. I made a simple breakfast of deviled eggs. I made contact with my friend Larry WB4FCU from my home town of Wendell.  We had a nice conversation. We attempted to include our friend KD4WJD Hugh but was unsuccessful.  He had just completed putting up his dipole and maybe since Larry and I was on a vertical and Hugh was on a horizontal we weren’t able to hear Hugh. After a few more contacts I got out the MFJ 1984 MP end fed antenna so I could set under the shade tree to see if I could make contacts.  It would not tune without a tuner. I set up the tuner and was able to make a couple of contacts and then I checked into the Virginia Fone Net.  KO4CUF Reba was the Net Control Station.  I am the regular NCS for Wednesday but I think it is important to give new people a chance and Reba and I are alternating for a couple of months. 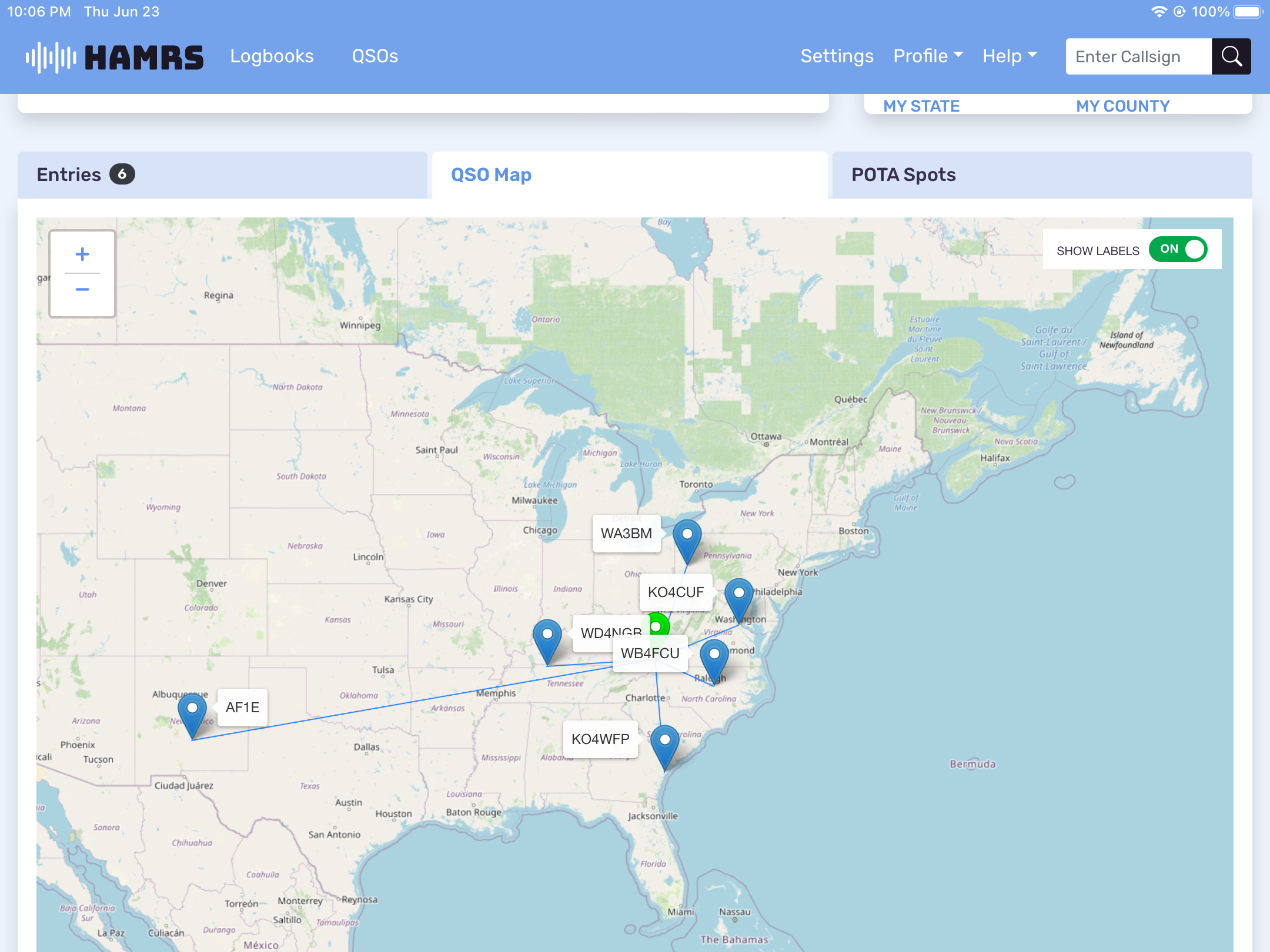 The next night I was preparing dehydrated vegetable soup for dinner but the same neighbor invited me over for breakfast for dinner.  Had homemade sausage gravy and biscuits. Another good meal. Amateur radio contacts were hard to come by but I did make the required 10 contacts that qualified me to activate the park for that day. 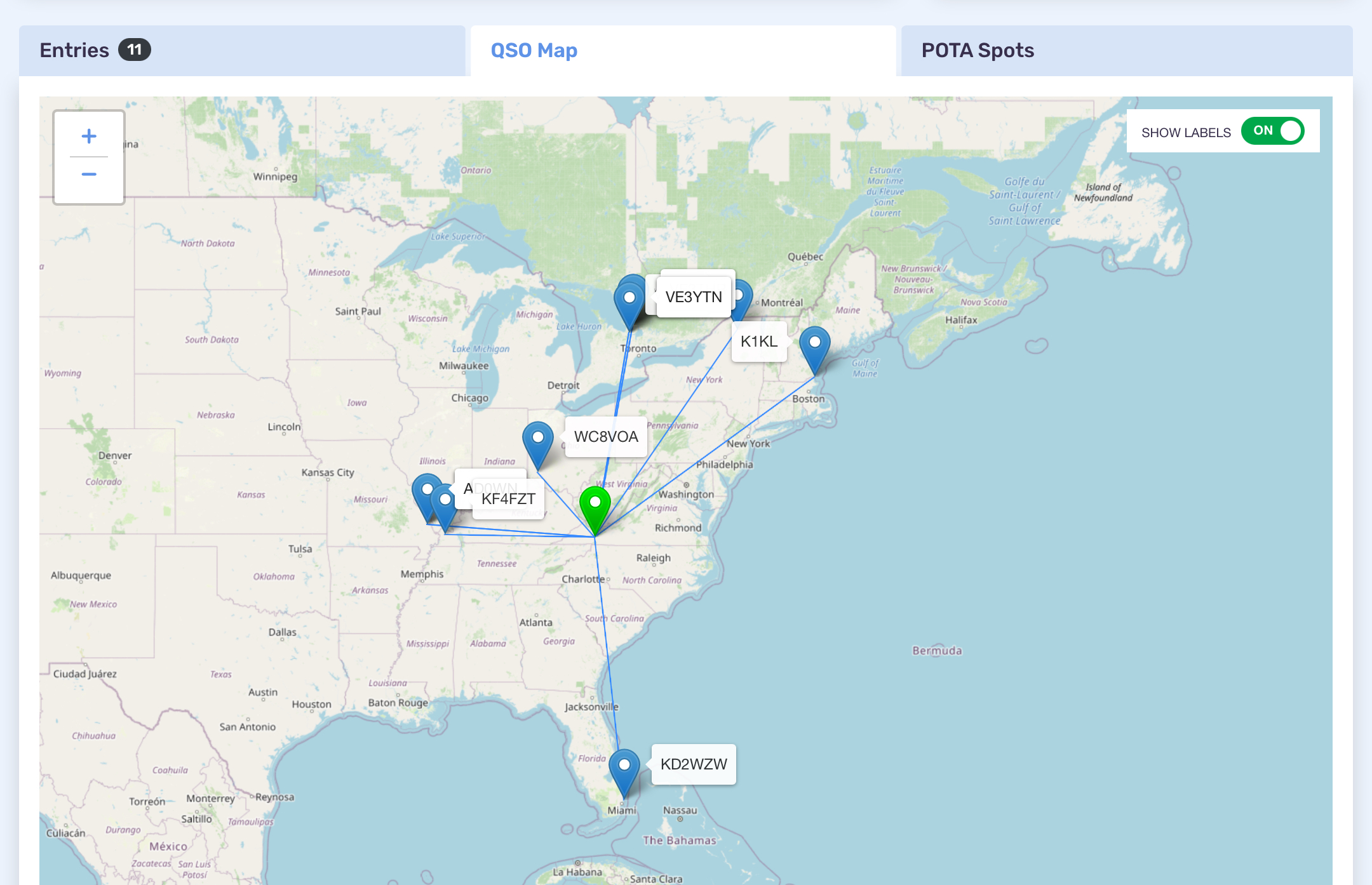 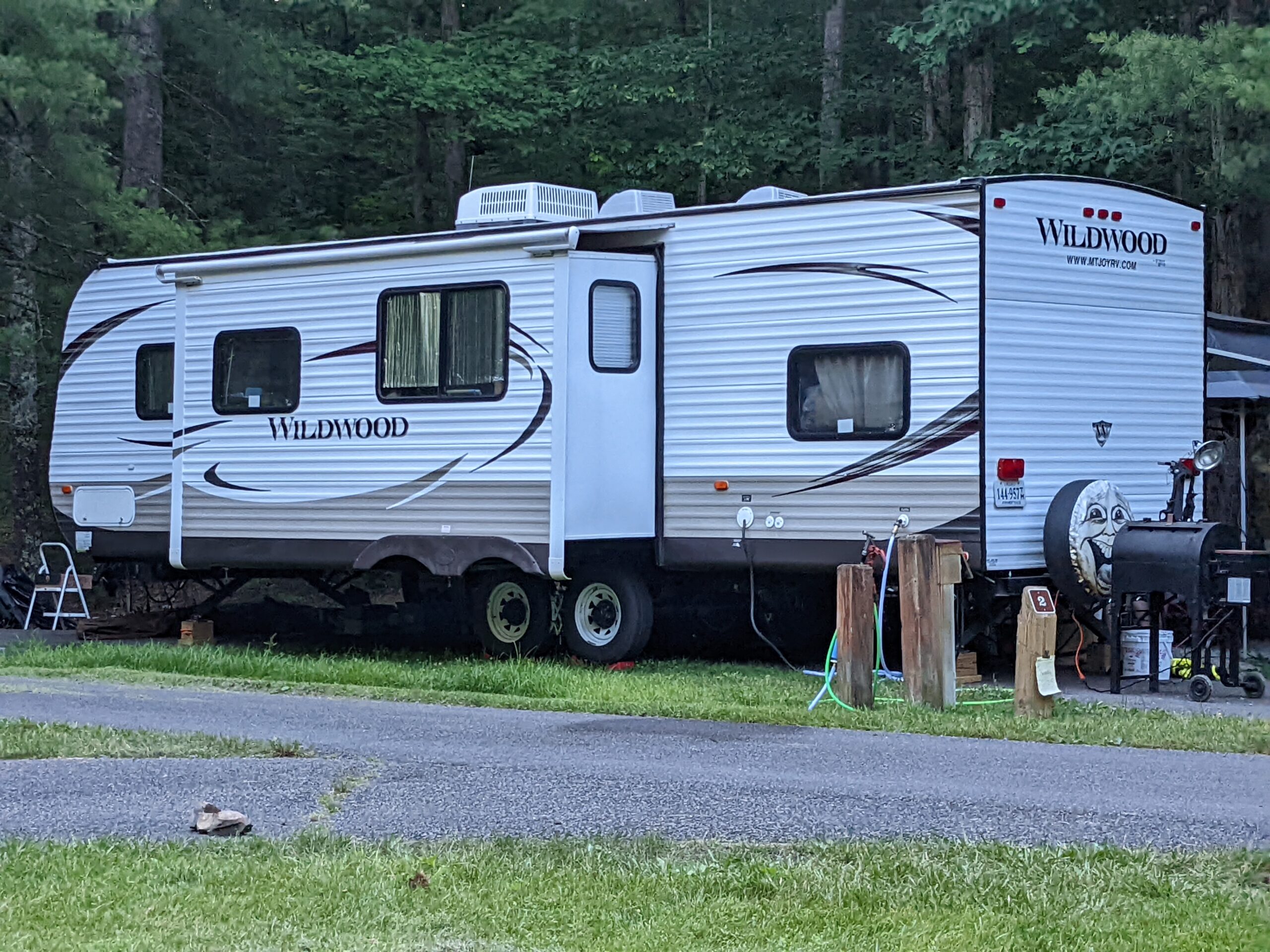 One of the neighbors trailer

i was able to set up a second tent called a 3 second tent.  I enjoy sleeping on a cot and the cot was a little tight fit. 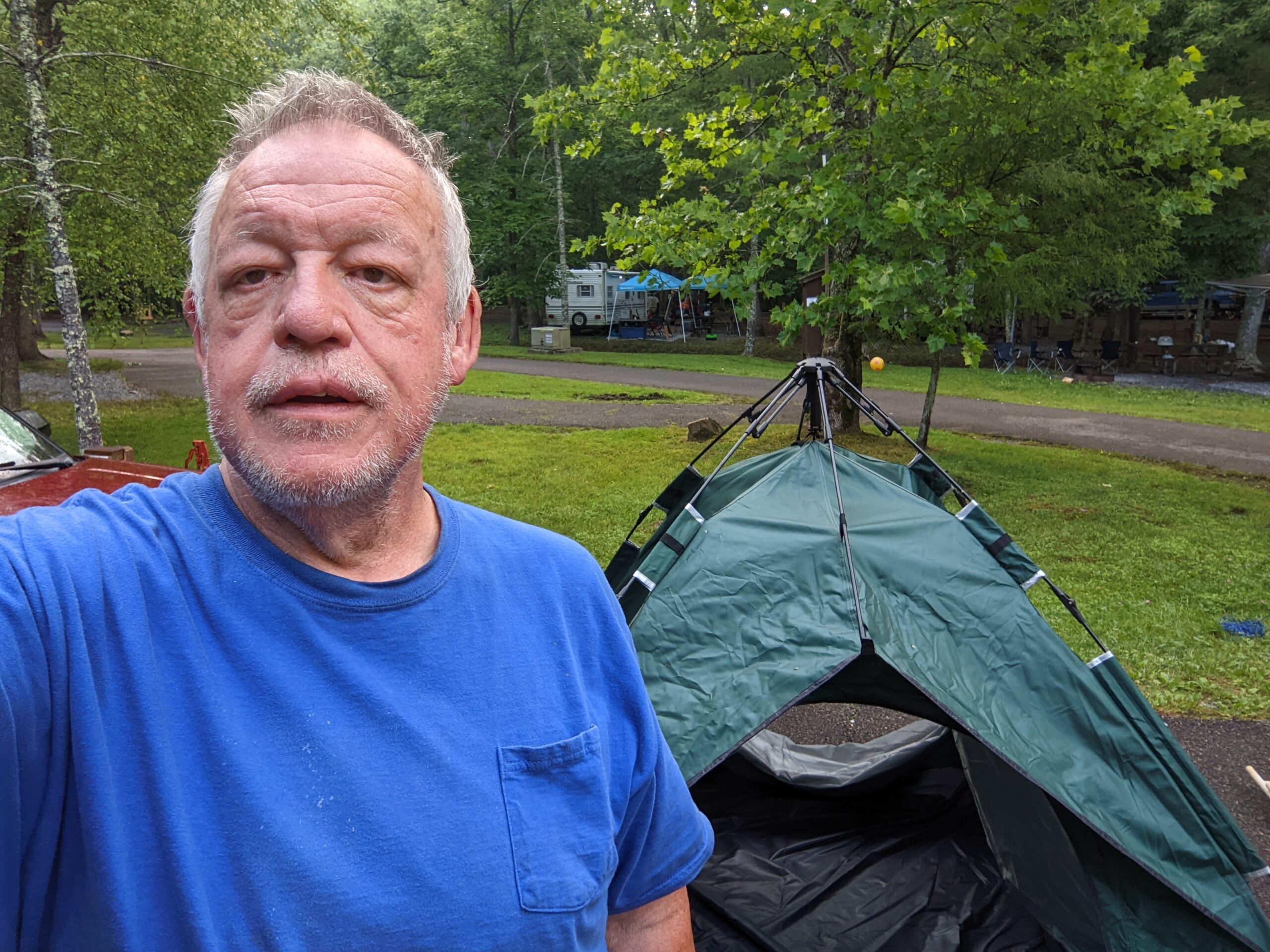 That night of camp saw some lightning.  I decided to put everything in the car just in case it rained.  Sure enough it started raining during the night.  Luckily no rain got into the tent.

I am developing plans to assist missionaries in getting their amateur radio license and teaching them how to set up portable stations. I hope this will be a tool they can have for their use either for times for emergencies or to use during their off time. 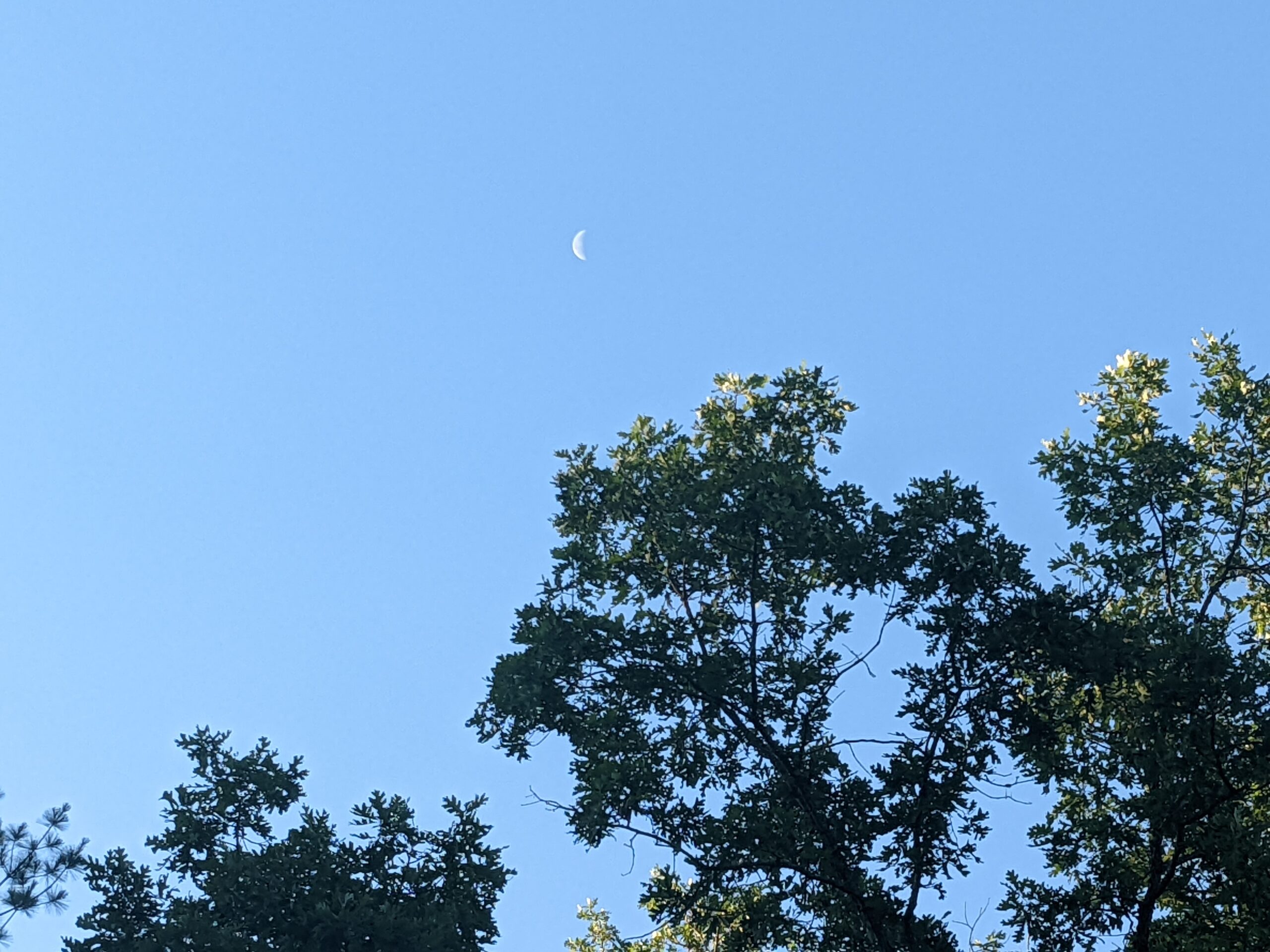 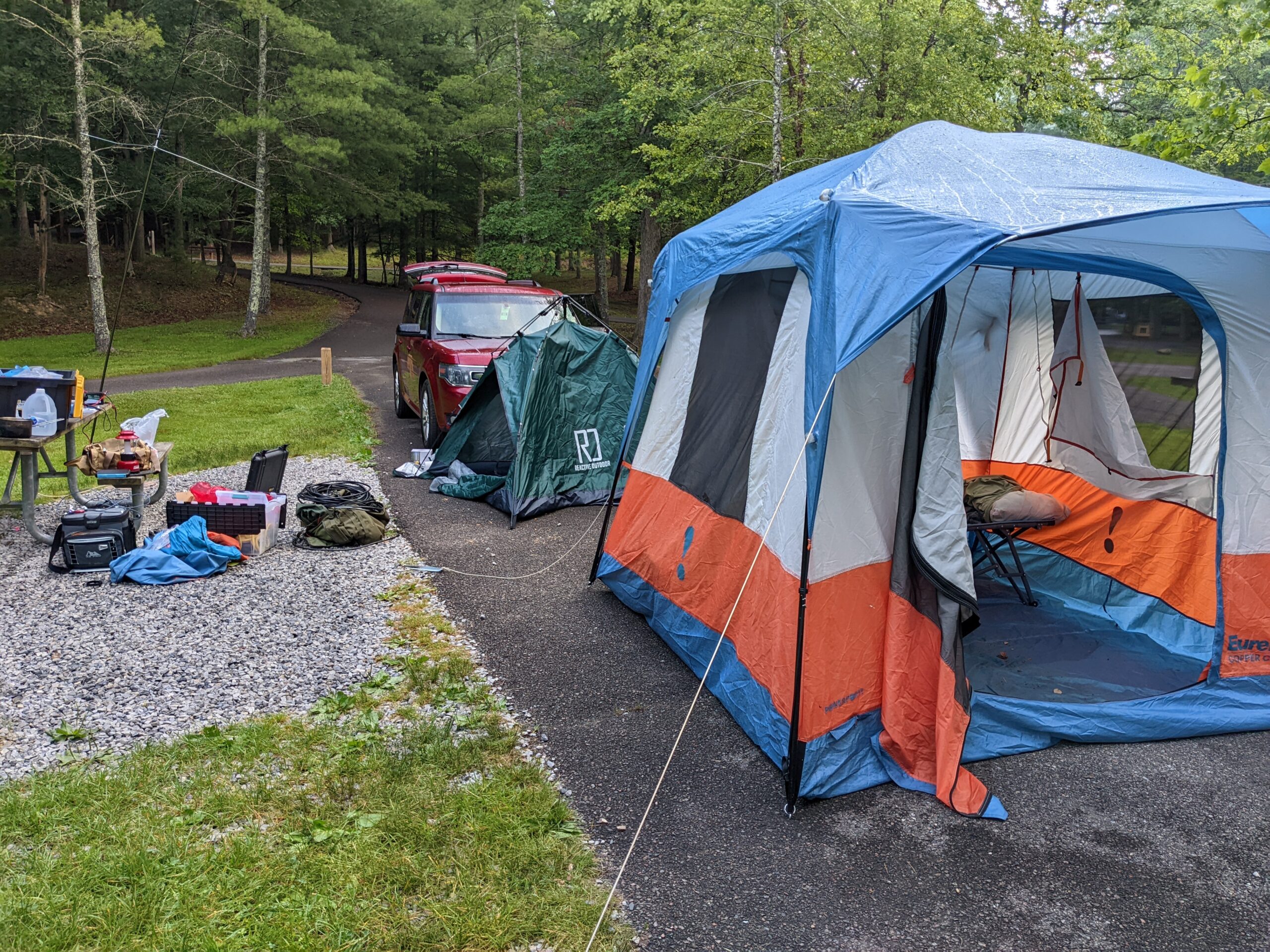 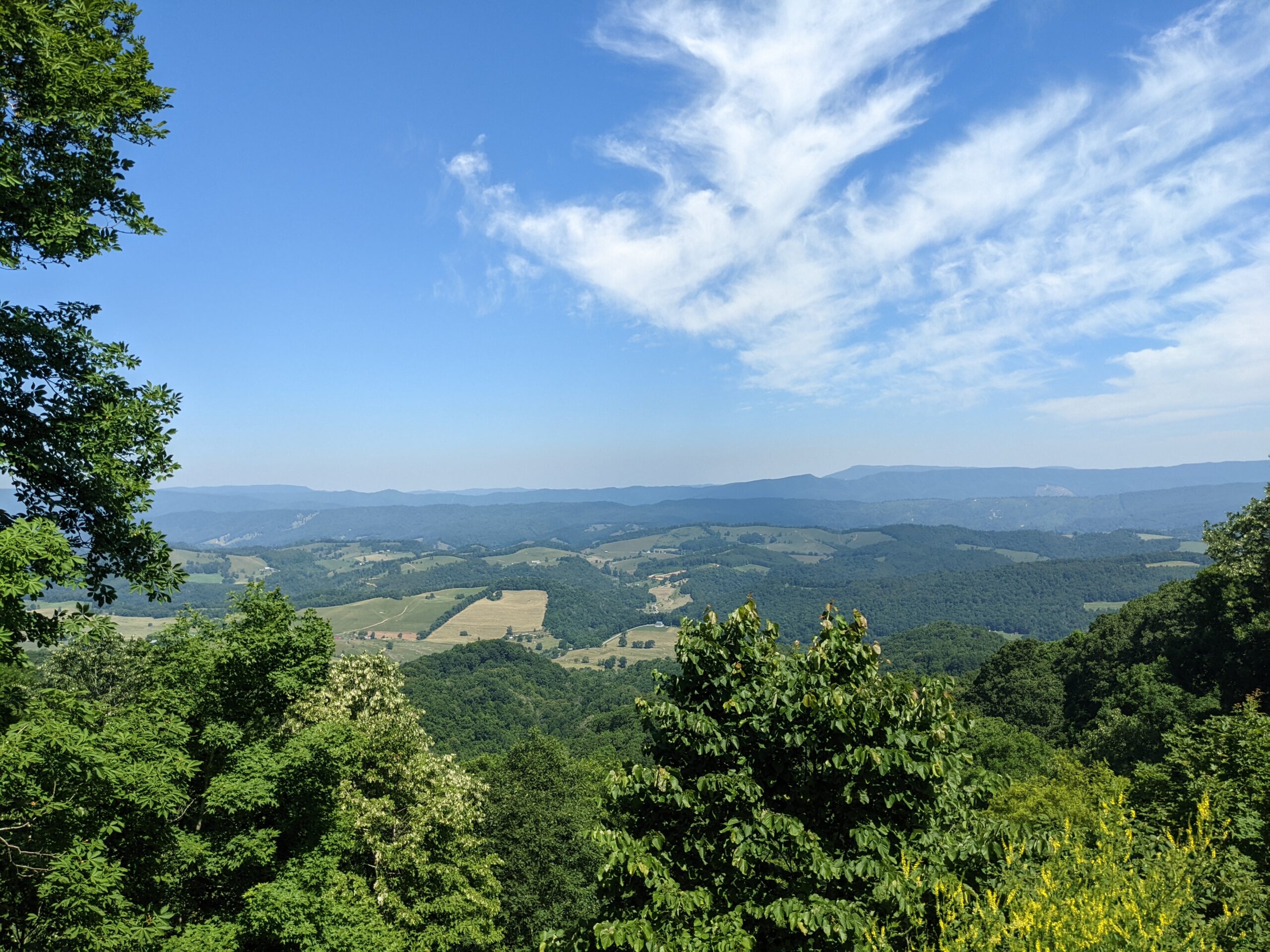 POTA has a great awards program. As a result of this activation I received the Late Shift award. 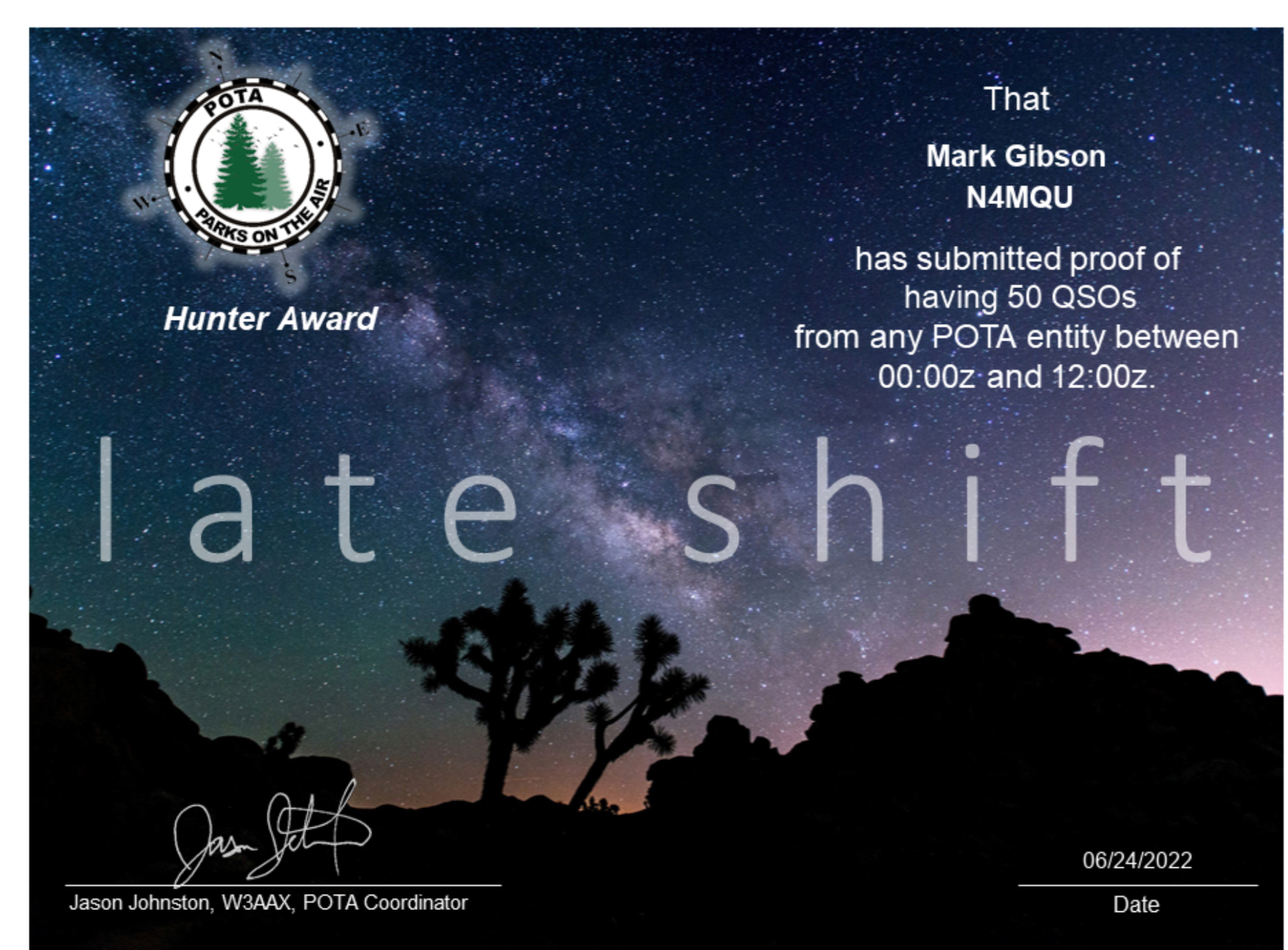 My first activation at my new residence.  NC K-6934 Pee Dee River State Game Land I see 4 POTA parks that I can easily get to. Living in the metropolitan area of Raleigh in order to activate the parks you had to work around traffic.  I see more activations in my future of multiple…

Location: NC K-3854 Middlesex  Date: 20221109 Equipment  Chameleon Portable HF Antenna CHA HYBRID Micro IC-706MKG HF/VHF/UHF All Mode Transceiver Fun fun fun activating my home park Flower Hill State Nature Preserve for the 27th time. I made it to QSO 806. I had a short time before darkness fell. I decided to use my…

I activated my home park today NC K-3854 flower Hill State Nature Preseve. If the FCC had an Aptitude test for getting your amateur radio license I would receive a low score but my enthusiasm overcomes that. I did have a few visitors to the nature preserve that was interested in what I was doing.…

Location: NC K-3854 Middlesex  Date: 202201031 Equipment  Chameleon Portable HF Antenna CHA HYBRID Micro IC-706MKG HF/VHF/UHF All Mode Transceiver There are various options in setting up the vertical antenna. Today I used the Cha Spike mount. We had a busy month getting our house ready for the market.  I decided to start activating…

Location: NC K-6964 Voice of America State Game Land Date: 20220923 42 contacts  Equipment  MFJ-1984HP, ENDFED 1/2 Wave 40-10M IC-706MKG HF/VHF/UHF All Mode Transceiver Operators Brandon KO4YJA, Mark N4MQU Prior to this activation the site had only been activated 4 times.  After we arrived we could see why. A lot of challenging obstacles.  I had…